So, just in case anybody's looking for some new fandoms to play around with but are at a loss of where to start, here's a few ideas by genre (though they're kinda biased because they're mostly ones I've watched in the past lol):

noun
1. an institution for popular education providing discussions, lectures, concerts, etc.
2. a building for such activities.
3. (initial capital letter) the gymnasium where Aristotle taught, in ancient Athens.
4. a lycée.

If you are stuck or would like a random word to use, poke me and I will provide.

Now everyone tell me about 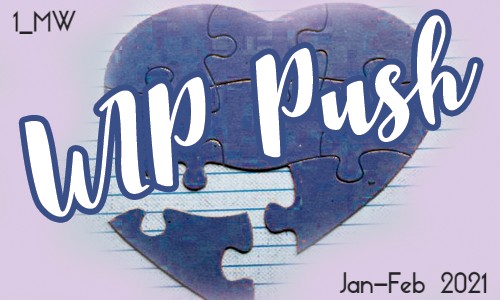 How'd you do? Get anything finished and posted? Link us here with a wee blurb so we can appreciate what you did!

Not finished, but added to a WIP or made some words/graphics you'd promised? YOU PARTICPATED! YAY, you!

As for me, I managed to make some icons and banners I promised, and I added a measly 123 (I may be remembering the exact number incorrectly, but it won't be more than 150 anyway) to a WIP I started last year. *sigh* it's still words; it still counts, but I do feel bad I couldn't have picked something I started TEN years ago and managed to finish it. Seriously, what the heck? I definitely need to either knuckle down to some of those oldies or just dump 'em.

All the same, I am pleased to have managed something, and I aim to manage something for the next long challenge too: POOL PARTY!!! Woot! Go check out K's initial post for this, and join the fun! ;-)

Anyhoo, comment here if you completed or participated in the WIP Push, and I'll use March to make you a reward banner! ;-)

So, here's an idea for you guys.  I know some of you aren't so much into fanfic writing anymore, but you can still use existing stories as inspiration.  Any public domain story (basically copyright free) can be used as inspiration or to remake as original fic (and thus be published and able to earn income).  This is why there's so many versions of Wizard of Oz and Alice in Wonderland.  Maybe Alice is an Alec? Or maybe Alice is the bad guy and the Queen of Hearts is just trying to wrestle her kingdom back from the grips of chaos? Maybe Dorothy winds up in a steampunk nightmare? What if Glenda is the bad guy and has tricked everyone into believing she's good? You get the idea.  Shakespeare's another good one. Think any Jane Austen or Charles Dicken book is included as well (explaining all the versions of Pride and Prejudice and A Christmas Carol).

Here's a link to find out how to determine if a book (or work) is under public domain, though it got confusing to me after a while; it might be easier to google "is X public domain". https://www.biblio.com/blog/2010/07/how-to-determine-if-a-book-is-in-the-public-domain/

And some more information about what you can do with public domain works https://gatekeeperpress.com/reprinting-and-selling-public-domain-books/

Also, if you're just wanting to read some of those books, here's a link that tells you about entire digital catalogues of free public domain books you can access https://www.vice.com/en/article/kz4e3e/millions-of-books-are-secretly-in-the-public-domain-you-can-download-them-free

1_million_words Pool Party Challenge, and a couple people who *really* wanted to see some Witcher fic ;)

A/N: Inspired by several Geralt/Jaskier fics by @xxenjoy on AO3 as well as who knows how many others. Also, I haven’t read the books or watched the series and I’ve only played through the first part of the third game a couple years ago. Literally everything I know comes from fanfic.

Summary: Jaskier discovers how touch starved, and just generally mis-treated Geralt and his brothers are and decides that Witchers deserve nice things too

Jaskier didn’t know how long he’d been traveling with Geralt when he finally realized how averse to touching the Witcher actually was. A casual shoulder bump or hand placed on an arm received an automatic glare. Gods forbid that he receive a longer touch than that.  But, being the observant, and stubborn, person that he is, Jaskier realized why Geralt had probably become that way.  Everywhere they went, from small farmstead to bustling city and everywhere in between, when people weren’t running from the mere sight of him, they were throwing things or spitting at him. Few were dumb enough to try to actually fight him, but in crowded cities there were a few not-so-casual shoves as they’d pass through the market, but Geralt would merely grit his teeth and continue on.
Jaskier didn’t know what was worse, the obvious hurtful touches and actions, or the more subtle ones. He’d watched Geralt be turned away from brothels, the guards afraid he’d be violent with the prostitutes. The way that parents would hide their children as he passed. How merchants would refuse to take money directly from him for fear of touching him.  The way that Geralt would always wind up at an empty table no matter how full a tavern was.
As tactile and affectionate as Jaskier was normally, and how well-loved (or at least lusted after) as he was wherever they went, it was a sobering shock to his system. It was no wonder Geralt didn’t want to be touched if he’d been suffering with that kind of behavior for decades, always expecting to either receive a hurtful touch or to be shunned completely.
Well, Jaskier was no coward, Geralt was a man, an extraordinary one, yes, but still a man, and he deserved to be treated just as well as anyone else.
Jaskier just had to convince Geralt of that.
Collapse