verb (used without object)
1. to roll, toss, or heave, as waves or the sea.
2. to roll, writhe, or tumble about; wallow, as animals (often followed by about): pigs weltering about happily in the mud.
3. to lie bathed in or be drenched in something, especially blood.
4. to become deeply or extensively involved, associated, entangled, etc.: to welter in setbacks, confusion, and despair.

noun
5. a confused mass; a jumble or muddle: a welter of anxious faces.
6. a state of commotion, turmoil, or upheaval: the welter that followed the surprise attack.
7. a rolling, tossing, or tumbling about, as or as if by the sea, waves, or wind: They found the shore through the mighty welter.

adjective
2. (of a steeplechase or hurdle race) pertaining to, or noting a race in which the horses bear welterweights.

I'm excited to be bringing you this year's first longer challenge! We have changed from monthly challenges to a period of approximately six weeks for each of these, apart from December which will be chock full of goodies, as per our last mod post! In any case, let me kick off Challenge #1 NOW!

It's time for Rare Pairs, so I hope this will bring forth your creativity with a pairing that perhaps isn't your usual, but has somehow taken hold of you! And friendship is just as good as romance for this one! Challenge #1 will run for the following period: 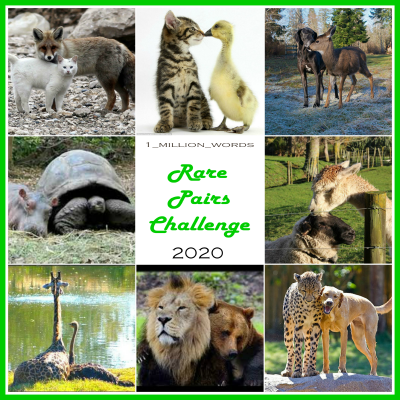 I'll be posting prompts regularly (I'll post longer ones every second day, plus I have some short prompts that you can ask for at any time) throughout the weeks of the challenge, so if you're running on empty with ideas, hopefully some of those will kick you off! I'll also use the prompt posts to check how you're doing and allow you to ask for help or advice if you need it.

The first longer prompt will be up tomorrow, but if you'd like one or more of the short prompts which are mostly one word (with a few 2 or 3 word prompts), then give me numbers between 1 and 150 and I'll give you something!

If you feel so inclined, comment now to let me know if you're playing and which rare pair/s you'll be taking on (if you've decided)! ;-)
Collapse