adjective
1. existing in a natural state, as animals or plants; not domesticated or cultivated; wild.
2. having reverted to the wild state, as from domestication: a pack of feral dogs roaming the woods.
3. of or characteristic of wild animals; ferocious; brutal.

Fic recommendation I'd like to recommend a Hawaii Five-0 fic series that I think is excellent!
Feral by

cattraine. It's dark and oh boy is there angst!
1. Feral: The Awakening
The world news called the virus the ‘Berserker Virus’ because, like the rabies virus, it affected the brain and drove its victims mad.

3. Feral: Timestamp II - Honeymoon
Honeymoon not so much fun.

Hello all! It's party-time in North America! Tomorrow, my country of Canada turns 150 years old, and on Tuesday the Unites States will be celebrating their Independence Day. Yay North America, get down with your bad self. So this weekend's challenge is "patriotic movies".

I have 19 quotes from a few movies -- 'Independence Day', 'Yankee Doodle Dandy', 'Captain America' and 'Red Dawn'. (And well, Canada doesn't really have any big rah-rah-go-Canada-yay type movies, so my homeland is being represented by the classic 'Anne of Green Gables'.) Pick any 2 numbers between 1 to 19 to be given 2 quotes, then do with them what you will. You don't have to use the exact quote in your story, be inspired however you like! Or create awesome graphics or icons.

ARE YOU READY FOR THE MONTH TO END? How'd you do?

"Human salvation lies in the hands of the creatively maladjusted."


Do with it what you will.

It's gonna be July! Anyone want to kick off the month aiming for some words? I have two times of day when I could be here for @2 hours - either starting at 11am Eastern/8am Pacific/3pm UTC or 9pm Eastern/6pm Pacific/1am UTC -- or both if we have takers. 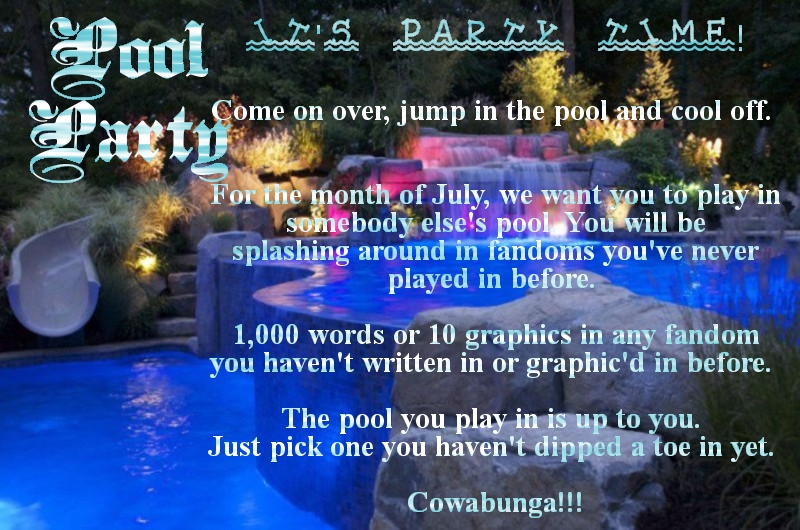 Come on over, jump in the pool and cool off.
For the month of July, we want you to play
in somebody else's pool. You'll be
splashing around in fandoms you've
never played in before.

1000 words or 10 graphics in any fandom you
haven't written or graphic'd in before.

The pool you play in is up to you. Just pick
one you haven't dipped a toe into yet.

graphic created by the lovely and talented