This time around it's one of my favourite topics featuring one of my favourite books with which to prompt you! The topic - which if you know me, you'll guess! - is gay romance! This does not mean you have to create something gay/slash if that's not your thing; just use the prompt in any way you want with any characters you like from any fandom or your own original arena.

The book: THE CATCH TRAP by MARION ZIMMER BRADLEY 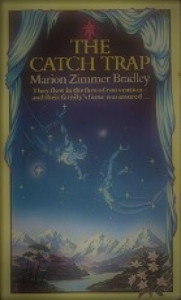 Your challenge is this:

Now, get those creating hats on - do it in combination with the last 100-in-100 or finish a WIP or any other darn thing you want, but get moving, everyone! Get that ONE MORE WORD in for 2016!

Your reward this weekend is simply in knowing you've added more words to the comm's count for 2016 (I'm afraid I still owe for the last set of rewards, so you know what I'll be working on this weekend - at least 100 words in your honour!). ;-)

I'm off to bed now on Friday night my time, but I'll be back first thing to start handing out prompts when I see your comments!

noun
1. purlieus, environs or neighborhood.
2. a place where one may range at large; confines or bounds.
3. a person's haunt or resort.
4. an outlying district or region, as of a town or city.
5. a piece of land on the edge of a forest, originally land that, after having been included in a royal forest, was restored to private ownership, though still subject, in some respects, to the operation of the forest laws.

THIS IS IT! First day of WIPness!

On the twelfth day of Wipness my wordies gave to me: A finished and posted WIP.