noun
1. a short and witty or sarcastic saying or writing.
2. Journalism. a short news story, often used as a filler.
3. a small firework, consisting of a tube or ball filled with powder, that burns with a hissing noise terminated usually by a slight explosion.
4. a firecracker broken in the middle so that it burns with a hissing noise but does not explode.
5. Australian. a coward.
6. an electric, pyrotechnic device for firing the igniter of a rocket engine, especially a solid-propellant engine.
7. Obsolete. a mean or paltry fellow.

verb (used with object), squibbed, squib·bing.
13. to assail in squibs or lampoons.
14. to toss, shoot, or utilize as a squib.

Sorry folks, my weekend was made of fail. This was supposed to be posted on Saturday.

hanorganaas made all her words and has let me pass the torch on for her, so....

thtwzjustadream, it's up to you now! YOU CAN DO IT!

So I am feeling like so much fail today it's ... I don't even know what it is. I barely opened an e-mail all weekend, and the only things that I accomplished were walking the dog, a load of laundry, and going to see Cap again. I know, this sounds like Bluesday rather than amazing Monday, right?

I started going through my inbox this morning, and while I can't comment on everything, WOW ARE YOU ALL SO INSPIRATIONAL!!! So much getting done, so many people helping out other people. Words, and pictures, and ALL THE THINGS!!!

You all rock so much that I'm determined to do at least half as well this week. I'm making a plan, and I'm sticking to it!!!

I know we tell each other how wonderful we are, and we cheer each other on, but it's not just lip service. You really are all so very amazing and the driving force behind so many things that get done.

I LOVE EVERYONE IN THIS BAR!!!

I was watching Good Morning America this morning, the hosts were saying thank you to the people that they believe are inspiring. So if you get the chance, take a minute and send off a PM to a friend, a thank you to a beta, or a you rock to someone who inspires you. Just saying!

Hi everyone; here's something to get your week started. This week we're all about recs. You got some reading matter you'd like to rec? Maybe there's this great wallpaper someone made that you'd like to show us? This is where you do it! 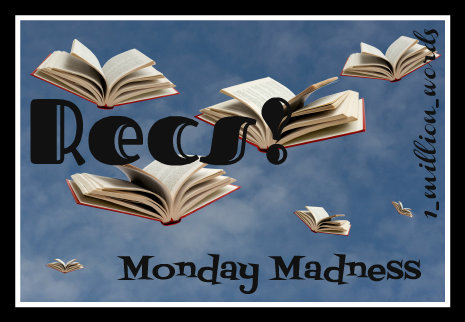 Today, I'm suggesting you rec something along these lines:

Once Upon a Time

Fairy tales, allusions to them or your fave characters thrust into a fairy tale situation; whatever takes your fancy, but something along those lines would be fantastic for this month's recs!

Any fandom, any genre, any creator, and any place. The only stipulation is that the creation must be openly available to public viewing, and perhaps you may also want to check with the maker that they are okay with you sharing to this community. Otherwise, go for it! We all need a break from making things ourselves, so see this as a reward if you will, and if it inspires you to create more words of your own in a similar direction (but no plagiarizing, obviously!), then it's even better!

So this morning, I woke up before my alarm and for a blissful eight or nine seconds it was Sunday....until I realized it was not. Oh no, it was not.

It was Monday. Ugh.

Well, I did not write the fic I had planned to tonight, but I did get 550+ words down on a WIP that's almost in my rear-view mirror! That just exceeds my daily minimum, so.....

chesneycat it's up to you, now. Good luck and hope the muses cooperate!
Collapse